NEW BOOK---JUST OUT! A GIRL FOR ALL; SEASONS

a girl for all seasons:A world class athlete's story of tragedy, triumph, and perseverance, Tracy Worley Hagen, has been a winner in three sports and mayor of her growing city four times. Her triumphs have been tempered by the deaths of two brothers and two husbands, but she persevered to raise two remarkable children, and to lead a very full life.

I love and respect engineers--my brother is one of them--but they seem to come in several flavors: the guys who put men on the moon, and those who are unable to design a public bathroom that makes sense.

Sure, among the populace are a few slobbish souls who walk away with nary a backward flush. So engineers have designed self-flushing toilets that respond without input from the user. I’ve heard them in public places—The Lonely Commodes, toilets in empty stalls, flushing away over and over, flushing themselves hoarse, as though for their own entertainment.

I’ve had nasty encounters with another variety—the Premature Evacuators. They wait until the seat cover is nicely placed, then flush away the cover just as you’re unzipping your pants. Many a time I’ve heard a suspicious noise and whirled around, throwing my palms onto the seat to save the cover. These are the potties that demand you use them without wasting time pulling down your pants.

I’ve met the Nervous Flushers—the ones that sail into action two or three times, just for the hell of it,  before you leave the stall.

Why, we wonder, did engineers decide ninety-nine percent of women couldn’t be trusted?  That we were somehow unwilling to press down the all-important handle?  For one . . . and yes, only one, flush?

A few engineer-designed sinks are no better. Okay, water is precious and needs to be conserved. We get it. So they give you cold water that runs only when your hands are soaped and under the faucet. (I’m okay with that). But in some bathrooms the sink offers only mini-squirts of warm water, not enough in one squirt to rinse one well-lathered hand, let alone two. For those I’ve had to retreat and advance my fingers seven or eight times, and in the end achieved maybe eight teaspoons of liquid—meaning the rest of the soap had to be wiped away on a paper towel.

And speaking of towels. Why did so many bathroom designers position the paper towels across the room from the sinks . . . leaving us no recourse but to drip, drip, drip, on the way to drying off? Who, pray tell, mops the slippery gap between sinks and towels?

Maybe things are different in men’s bathrooms. I’ll never know. But I do have one suggestion—that women engineers design the equipment for women’s bathrooms. Why on earth was this job entrusted to someone who, on most occasions, needs only one downward zip and one grab and he’s good to go?
Posted by Maralys Wills at 3:59 PM No comments:

I WOULD HAVE PAID MONEY FOR THIS!

Review: Damn the Rejections, Full Speed Ahead: The Bumpy Road to Getting Published by Maralys Wills 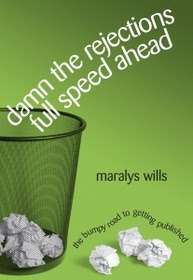 Yes, it’s a how-to book all right, but not just about dealing with the rejection of a manuscript. The goal of Damn the Rejections Full Speed Ahead: The Bumpy Road to Getting Published (Stephens Press, 2008) appears to be preemptive, an instruction manual on how to write so as to minimize the chance of rejection.

That’s right: yet another tome on technique, writing dramatic scenes, developing characters, how and when to research, the do’s-and-don’ts of collaboration, writing query letters, preparing proposals, and, last but not least, marketing in all its facets, peddling to agents, publishers, self-publishing on the Internet.

But this one is different. Maralys Wills brings us in close, really hunkers down. She confides in the reader. She shares how she has learned, often the hard way, to craft a compulsive read. This type of intimacy to the fledgling (or floundering) writer is something she has in common with a fellow teacher, Stephen King. She refers with great admiration to his seemingly ubiquitous work, On Writing. But Wills does not share his attitude. She does not believe that “books about writing are filled with bullshit.”

Wills shares what works for her, and what doesn’t; how to make the most of being “in the zone”; how to deal constructively with a long hiatus or writer’s block; how to channel persistence, foster patience and build self-confidence. The familiar instructional staples on writing craft are laced liberally with anecdotes of tragedies and triumphs, both personal and professional. She offers tips that are lean, incisive and practical.

She employs by example all she has learned thus far through memoir, fiction, nonfiction, and even reportage. By way of her experience in these different genres, she ends up with an entertaining hybrid. (Incidentally, this isn’t Wills’ first “how-to”; she also wrote a party-game book that took quite a while to find a suitable publishing house.)

As a screenwriter I took particular interest when she spoke of the irony surrounding Schindler’s List and how the story was brought to light about a shop-owner, survivor of the Holocaust, a “caretaker-of-history [who] had tucked away his memorabilia in the back of his store and kept is safe…none of that would have happened without the passionate Jewish man who kept the story alive.” A weird twist of fate brought Oskar’s shrewd, courageous sacrifices to life and earned Spielberg a singular gold statuette for direction. The point is: if there is any consistent thread weaving through the thoughts, devices, tips, tricks, chidings, admonishments and encouragements that Wills lays down for her readers, it is just that: keep the story alive, even against one’s better (or worse) judgment.

Wills uses short chapters which is perfect for her style: precise, pragmatic, avoiding theories and philosophies of creativity which, admittedly, works very well for some teachers of the craft, among them John Gardner, Natalie Goldberg and Dorothea Brande. And because the writing is so spare, each chapter gives you a lot to chew on.

Yet she gives curiously casual regard to her successes, ending the book with a chapter entitled, “The Payoff,” where still she questions her efforts: “Why am I doing this?..When my writing income is about a nickel an hour…when no university is clamoring to drape me in purple and make me its commencement speaker…”

It was her zinger of an answer that spoke to me, the mantra of those of us who discover we have no choice but to write:

“I am most alive when I’m writing.”

–David McDonald is a guest reviewer this month.

Eager Writers! Where Are You?

Next weekend, hundreds of writers are coming to the Writer's Convention in Newport Beach. I'll be teaching there--but unless you've sent me an Advance Read manuscript, we won't have much time for a personal chat.

Yet in three weeks I'll be in Vermont, at the Landgrove Inn--with editor Carolyn Uber--and we'll have THREE DAYS to give you and your manuscript all the time you need. Three days with three other writers and no interruptions. October 10-October 13.

Three days of great food in a fantastic setting--brilliant red and orange leaves everywhere--and the editor and I ready to give you our full attention. All at a reasonable price. So now I have just one question: WHERE IS EVERYBODY?
Posted by Maralys Wills at 2:06 PM 1 comment:

We’ll see you there!

Posted by Maralys Wills at 10:38 AM No comments:

The leaves are red, orange, and scarlet. The Inn is quaint, with gourmet meals. And an editor and twelve-book author are there, ready to give you personal, in-depth help with your manuscript.

Come to Vermont at the height of the leaf-peepers’ season—October 10-13--Columbus Day. Carolyn Uber, senior editor for Stephens Press, and Maralys Wills, author and teacher, will give you the help you need to produce a great manuscript. Three days—the kind of writers’ workshop you’ve always dreamed of. Personal help from the experts.

Posted by Maralys Wills at 10:46 AM No comments:

This blog addresses writing, publishing, and thoughts on the publishing world

Maralys Wills
I'm the author of 15 books, scattered like birdseed over six genres. My favorite book is always the one I wrote last. Right now, that book is a memoir about growing up with a mother married seven times.My biggest moment was a glowing critique for my writing book from author Sidney Sheldon. I've written four memoirs: "Higher Than Eagles" garnered 5 movie options, and the two mostly humorous memoirs won national awards. My latest is the growing-up story, "The Tail on my Mother's Kite." My writing book, "Damn The Rejections, Full Speed Ahead" was named the winner of "Best Books." I'm married to a lawyer and am the mother of 6 kids--five boys and a girl.

THE book on how to write a book!

Visit the book store at Maralys.com.

Looking for a Speaker?

I speak on many topics: writing, publishing, memoirs, humor, and family stories.

For more information, visit the speaking page on Maralys.com.